Cool down and belt presentation

Please remember that grading days are a celebration and a test of skills, knowledge and heart that all the family can share in!

We recommend that gradings are conducted in a very public environment, they are a very important and effective for building self-confidence in your members. The grading provides an environment for the student to display their progress in public under pressure, the reward they receive for facing and conquering this challenge will inevitably improve their confidence and self-worth.

We advise for kids grading’s that you hand out invitations 3-weeks prior to the grading day, invitations should be given to children that are attending regularly and progressing with their personal Jiu Jitsu journey.

Each BJJ coloured belt has 4 stripes, all of these stripes are individual ranks that must be earned before you can progress onto the next belt level.

For adults our advice would be for you too hand these stripes out during big classes or as part of the team training held twice yearly with our head instructor.

Both kids stripes and belts can be earned at your grading’s which we advise you to hold every 8-weeks.

On the Adult side coloured belts can only be awarded by the Head Instructor at the pre –arrange team training day twice yearly.

Remember the grading is by invite only so the students are constantly being assessed in class.

Grading’s are one of the main ways that people especially children learn about setting and achieving goals in Brazilian Jiu-Jitsu training. They learn that with effort and persistence comes reward.

There are no maximum number of belt colours that can be skipped if you are prepared to put in the time and the dedication. 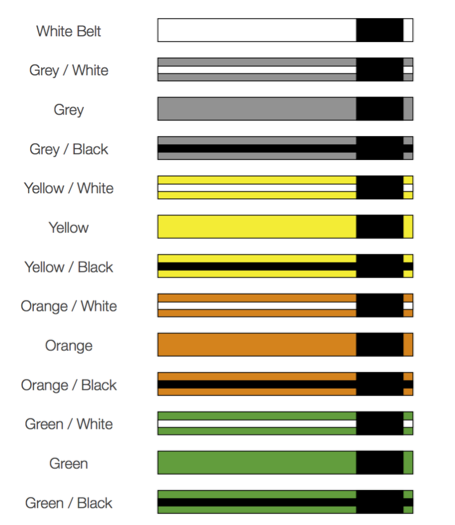 How the Stripe system works

Stripes are attached to the black bar on the end of the belt and represent different levels of achievement and progress through the ranking system.

1st stripe   – You have successfully shown that you understand the techniques for your belt level.

2nd stripe – You are able to demonstrate the techniques at a higher standard for your belt level.

3rd stripe – You have shown improved efficiency in all the techniques for this belt level.

4th stripe – You are fluent in the techniques for your current belt level/rank and ready to start training towards the next coloured rank.

Stripes are accumulated at each grading, by the time you reach your 4th stripe you should be ready to move onto the next belt level, if you are not ready the instructor will advise you of your options.

Attributes you should look for in your students

Inform students that they are aiming to progress one level per grading.  You should try to manage the student’s expectations so to avoid disappointment.  If they happen to achieve more than a stripe or belt it is an added bonus for their efforts.  Remember student’s train at different levels, some student’s train twice per week and some up four or five times per week.  This is why managing expectations is very important.  It is better to be fantastic at your belt than to be average at your belt.  As an instructor you can assist in managing your students expectations it will help in keeping their confidence and self-esteem high.

This is also a fabulous time to impart a life lesson for your student – that effort leads to reward!

PROCESS FOR A SUCCESSFUL KIDS GRADING: